“It had to be done,” wrote Roman Vishniac about creating his photographic memory book of Jewish life in eastern Europe during the 1930s. “I felt that the world was about to be cast into the mad shadow of Nazism and that the outcome would be the annihilation of a people who had no spokesman to record their plight.” Most of his photographs were confiscated, but his father saved a remnant at the risk of his own life, and when it was published after the outcome the son called it A Vanished World.

A similar impulse drove Edward S. Curtis to amass his twenty-volume photographic ethnography The North American Indian (1907-1930). At the outset, in the introduction to volume 1, he proclaimed: “The information that is to be gathered . . . respecting the mode of life of one of the great races of mankind, must be collected at once or the opportunity will be lost.” So there’s an undeserved irony in the circumstance that most of the negatives that came into being under Curtis’s hand are now lost themselves. Some were thrown away during the years of oblivion before Curtis’s art was rediscovered in the 1970s; others he had destroyed himself to keep his ex-wife from getting them. Even in the Library of Congress, the Curtis archive (http://www.loc.gov/pictures/collection/ecur/) survives only at second hand, as a collection of positives.

You can see the consequence in this one, an image titled “An Ostoho Cow Boy — Apache.” 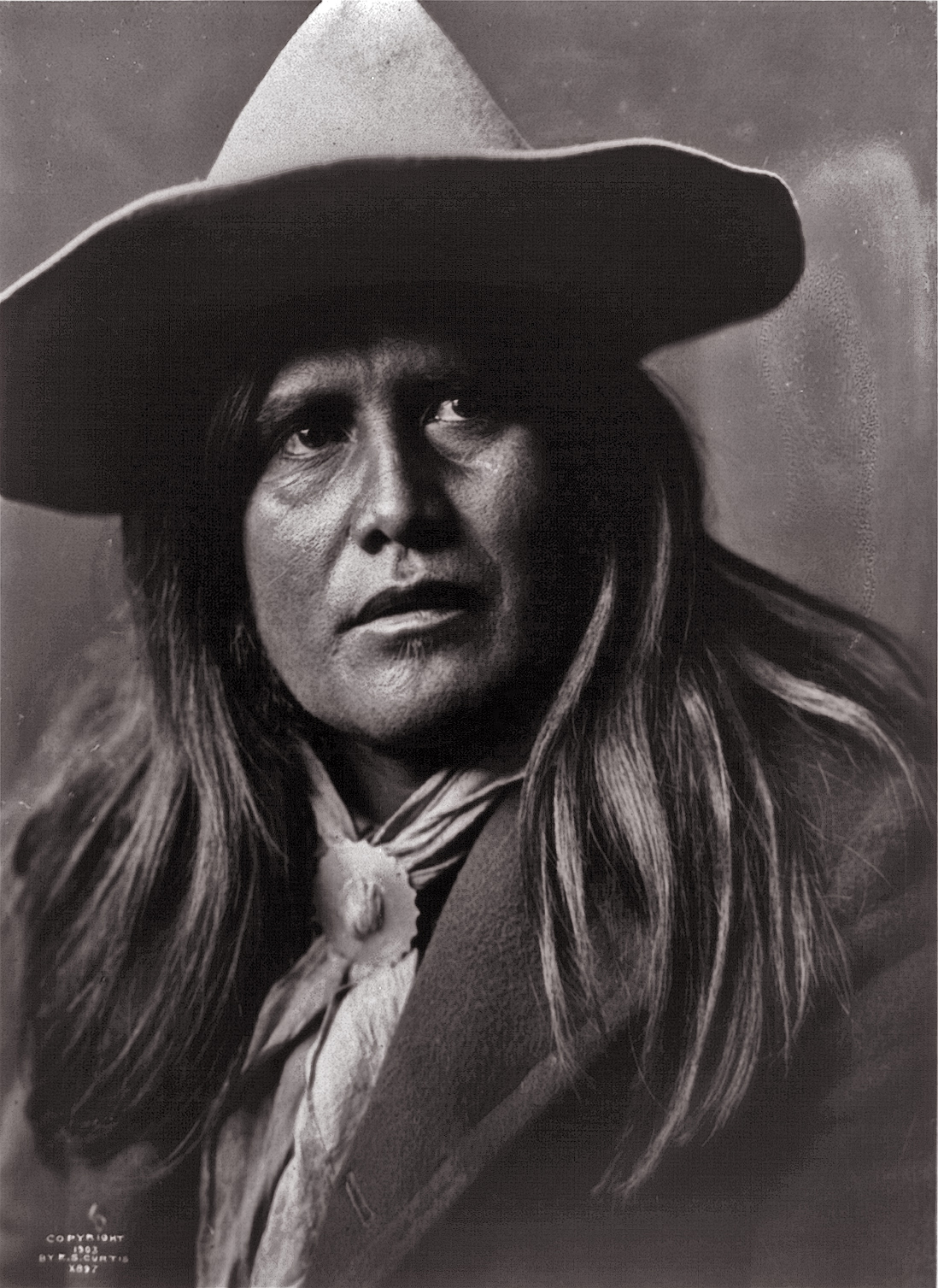 The photographic process that was available to Curtis records a single passage of light between subject and object, repeated once in reverse. Light is reflected from a subject onto a transparent photosensitive surface (the negative), then transmitted back through the negative to an opaque photosensitive surface (the positive). But the Library’s online image of Cow Boy, a rephotograph of the original positive, is a record of light force-marched along a second passage, and en route the record has been altered. Some qualities of the negative — some of its resolution and spectral range — must have been lost to entropy, and in addition the second positive has been contaminated by traces of the first. From the grid of laid lines in the original print’s paper, the reprint has caught a superimposing pattern. The shaded areas of Cow Boy’s face are henceforth to be seen there through a veil, just like the whole of Human Girl’s face in this other image. 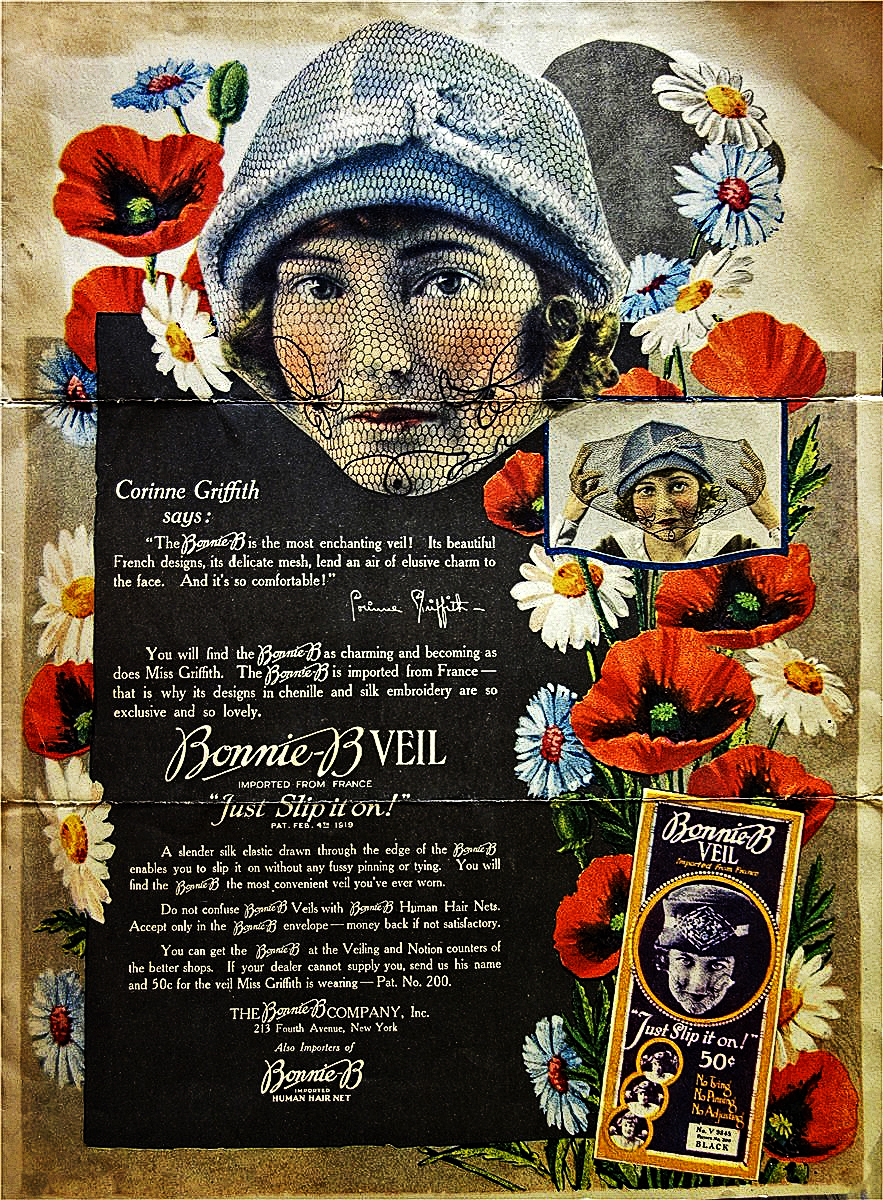 But the two veils work differently. One day a pretty girl named Corinne daringly cried, “Just slip it on!” to herself, and as she cast that spell she entered into its elusive charm. The charm worked, too; Corinne’s name has lived happily ever after, at least as a dated sobriquet in Wikipedia: “The Orchid Lady of the Screen,” 1894-1979. But Cow Boy has no sobriquet. “Remember this!” cried the photographer Edward S. Curtis, slipping the veil onto Cow Boy. But the name that ensued didn’t refer to the image that Curtis’s spell had created. It was a name only for the invisible spectral range of Cow Boy’s life: the range where his cows grazed, which wasn’t included in the image and hasn’t made it into any history of the North American Indian.

But as long as we remain within the image’s visible spectrum we must obey its creator’s command. Under the charm of its spell we do remember, and as long as we are under the spell we may think we know Cow Boy. But Cow Boy may not be capable of being known. What his image seems to show us is a trying to see up and out, from the image toward the source of its light. But all that survives of Cow Boy himself remains within the image: seeable only through the mesh slipped over it by the secondary positive, permanently veiled.

I have photoshopped the undated advertisement for the Bonnie-B veil from http://blog.vintascope.com/post/87793090508/bonnie-b-veil