In the Library of Congress at http://www.loc.gov/pictures/item/det1994016929/PP/, this photograph has gone white with lost detail. We pretty much have to take the librarians’ word that it depicts a famous American train from the turn of the twentieth century, the New York Central Railroad’s Empire State Express, on its way though Syracuse. For their own part, the librarians can only approximate the date of the passage. The faded image and its owners’ records tell them only that this photograph of the Express’s transit was taken some time between 1900 and 1915. 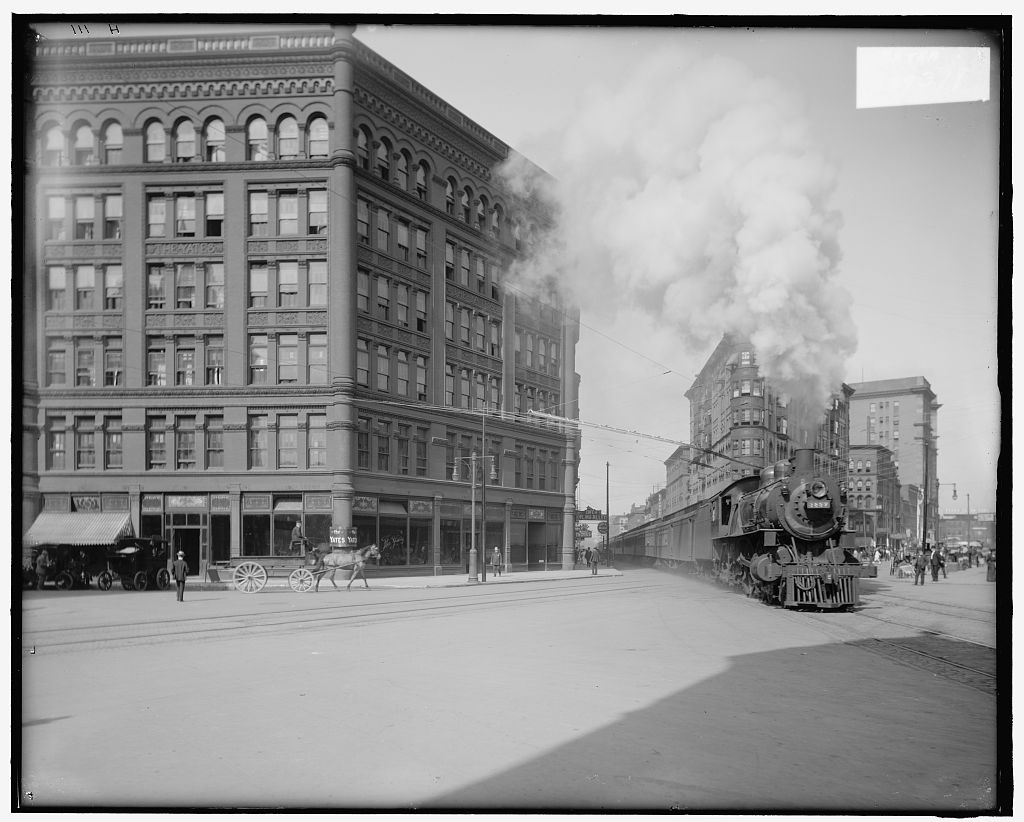 But parts of the transit can be retraced by post-processing, and I suppose that may aid in fine-focusing its history. Clicking away from this image to the next one, for instance, a railroad historian might be able to do something with the more legible number on the Express’s locomotive, and a fashion historian might be able to make something chronological of the dress worn by the one woman I can now see again. For historians of Syracuse, too, Photoshop has put the century-old signs back up on Syracuse’s businesses. See how that has put the big building on the left back into communication with time. Carved deep into its rock there on an upper-story frieze, the two monosyllables The Yates look once more the way they did on the date of the transit: as if they’d traveled to The Yates by express from Mount Sinai. The history of The Yates, says reread stone, hasn’t had to die after all. The lost, says Photoshop, may be restorable. 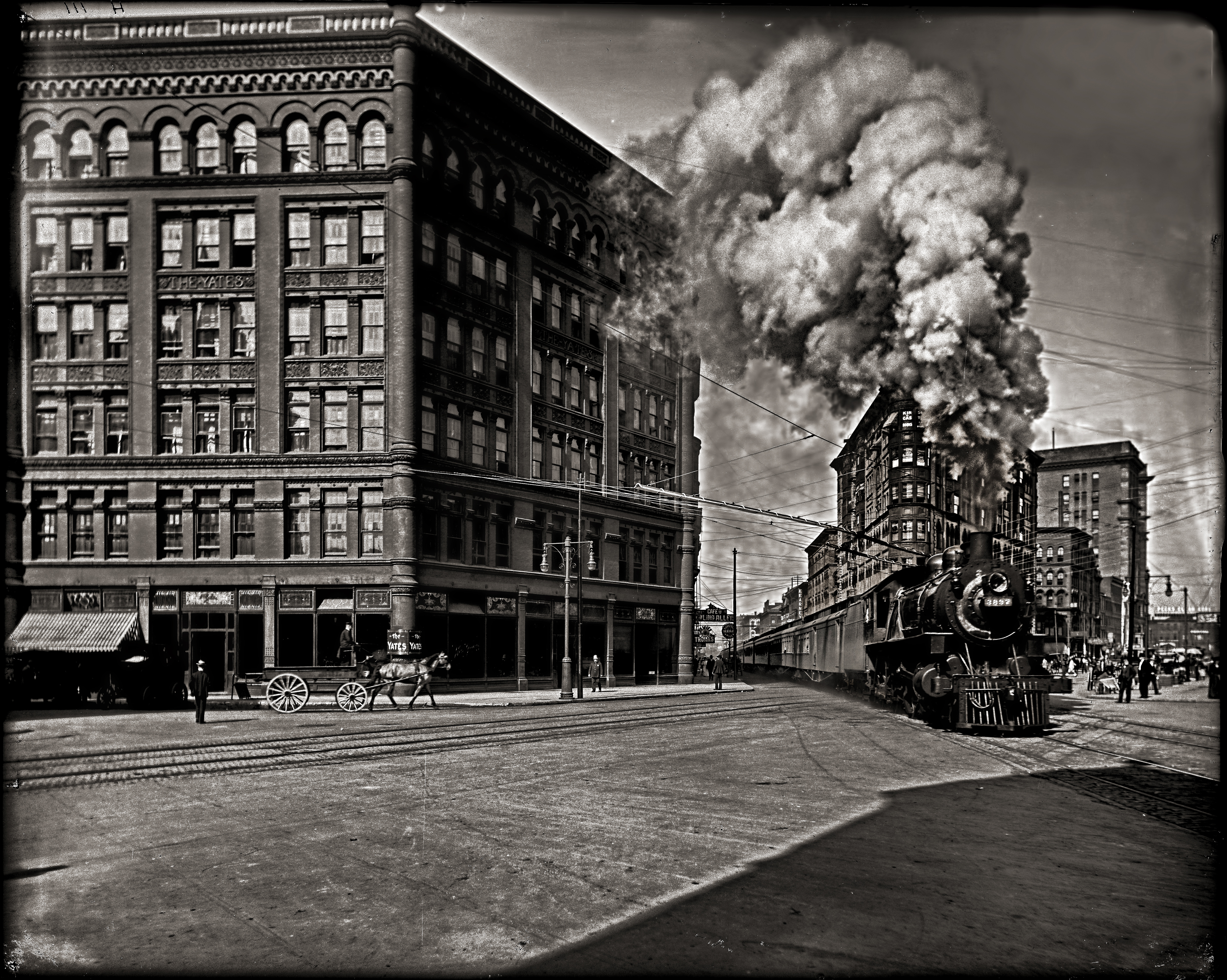 But to read the history of the image as a whole we’d need to know the history of the light that filled a camera in Syracuse for a sunny moment some time between 1900 and 1915, and the lighting script for that moment has been rewritten. Syracuse’s light isn’t now what it was during the century and a half of the steam era. Seen through smoky light as it was seen then, the Express under its moving cloud has passed through Syracuse forever, and it won’t be back. Light no longer works the way it did when locomotive no. 3897 offered up its smoke to the air. On the building to the left, the frieze that the sun lighted in those years was lighted for those years only. Then its inscription, “The Yates,” was to be read only by day, under layers of soot; now it’s to be read by day or night, carbonless by day and with its night colors changed by sodium vapor.

Because the way we read is always changing in this way and others, a poet once dreamed of a writing as resistant to change as metal. He was old, he cried, and about the light and shadow of the changing earth on which his body lay he cried, “That is no country for old men.” Funnily, he had a name homophonic with “Yates,” and in his hard Yates poem he sang,

Once out of nature I shall never take
My bodily form from any natural thing,
But such a form as Grecian goldsmiths make
Of hammered gold.

And yes: framed here on your monitor, The Yates does look lapidary, hammered into a permanent place in a permanent image. But compare the original image with my photoshopped version and you’ll understand that the lapidary look is only an effect of artifice and temporal confusion. Next to an image of a vanishing cloud of smoke, an image of a stone building looks immortal by comparison. The symbolism of this particular building’s Renaissance architecture, too, is an evocation in stone of ideas like traditional. But a tradition expressed within an image must have originated outside the image, before the image existed, while on the other hand the image’s work of evocation can begin only within the image. First an artist envisions an empty frame, and only then does it begin to fill itself with picture. Look up, for instance, to the dappling light near the top of The Yates where smoke seems to touch and fill and then withdraw from shadowed stone. It’s the pictured dapple, only, that hurts your heart. And as to you with the hurting heart who take your picture from an upper-story window, you have set up your camera on the Express’s side of the street, where nothing is still.

Leave the camera there and descend. Cross from the single hard-edged shadow of your building into the unclear polyshadow of the smoke. Approach the still glass front of The Yates along the roadway where Syracuse’s slow light is moving a horse and a tall-helmeted policeman into position. Step between the horse and the policeman. The light reflected from their bodies will help you when you begin looking into the window. For now, the window in the image lets you see only two glittering words, The Yates, and a tall-helmeted reflection. While the shadow of the smoke lasts, there will be nothing else. But when the shadow moves off and the Express is gone and the dark glass is restored to full reflectivity, the Syracuse light may unseal its record. And then, under glass in the smoky light that once illuminated the dead, you may see that you too have been changed by passages over you of cloud and light.