At White House Landing on the Pamunkey River in Virginia, at some time during the Overland Campaign of May-June 1864, a load of hay destined for the Union army was unloaded from a barge. Timothy H. O’Sullivan’s photograph of the event, photoshopped below, is in the Library of Congress at http://www.loc.gov/pictures/item/2012649517/. A different print, with more information about the photographer and the subject, is in the Metropolitan Museum of Art at http://www.metmuseum.org/collection/the-collection-online/search/263051. 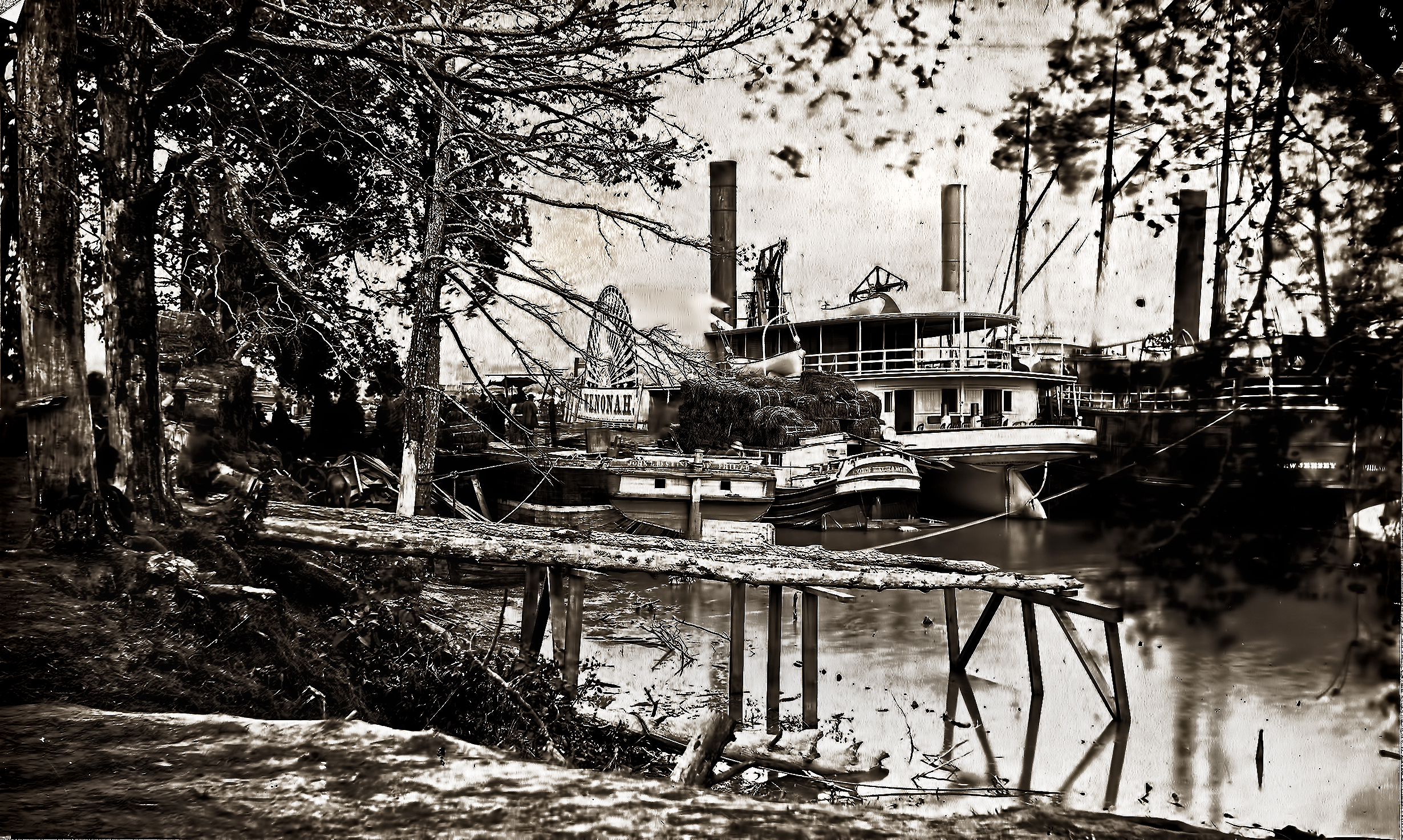 The faded original image looks like a well balanced picture, with only a few masses remaining to present to the eye. With its detail restored, however, the image becomes almost histrionically busy. Set off within a proscenium made of trees and unfinished lumber are four vessels, each one bearing a crisply delineated name as it rides the waters of the Pamunkey: steamers New Jersey and Wenonah, barges Corn Exchange and John L. Ristine. Timothy H. O’Sullivan’s long exposure time smoothed the moving water at the base of the setting and fused the men unloading hay from the Corn Exchange into a single industrious blur, but the vessels were heavy enough to hold still and let us read their names forever after.

There, forever after, Wenonah’s name will be seen to be an elegant affair, all serifs and gingerbread work, accessorized with the hay and a gracefully shaped boat and a fluffy puff of steam. By contrast, the name on the warped and flaking boards of the John L. Ristine has little to say to us. Down there at water level, John L. Ristine is only about hay and self-effacement. For a fraction of a second the name Ristine was visible to the history which also came to include General Grant and his Army of the Potomac, but even then the men who remain in its image were looking not at it but at pretty Wenonah and the army’s hay. But in the historical continuum there also remains this. 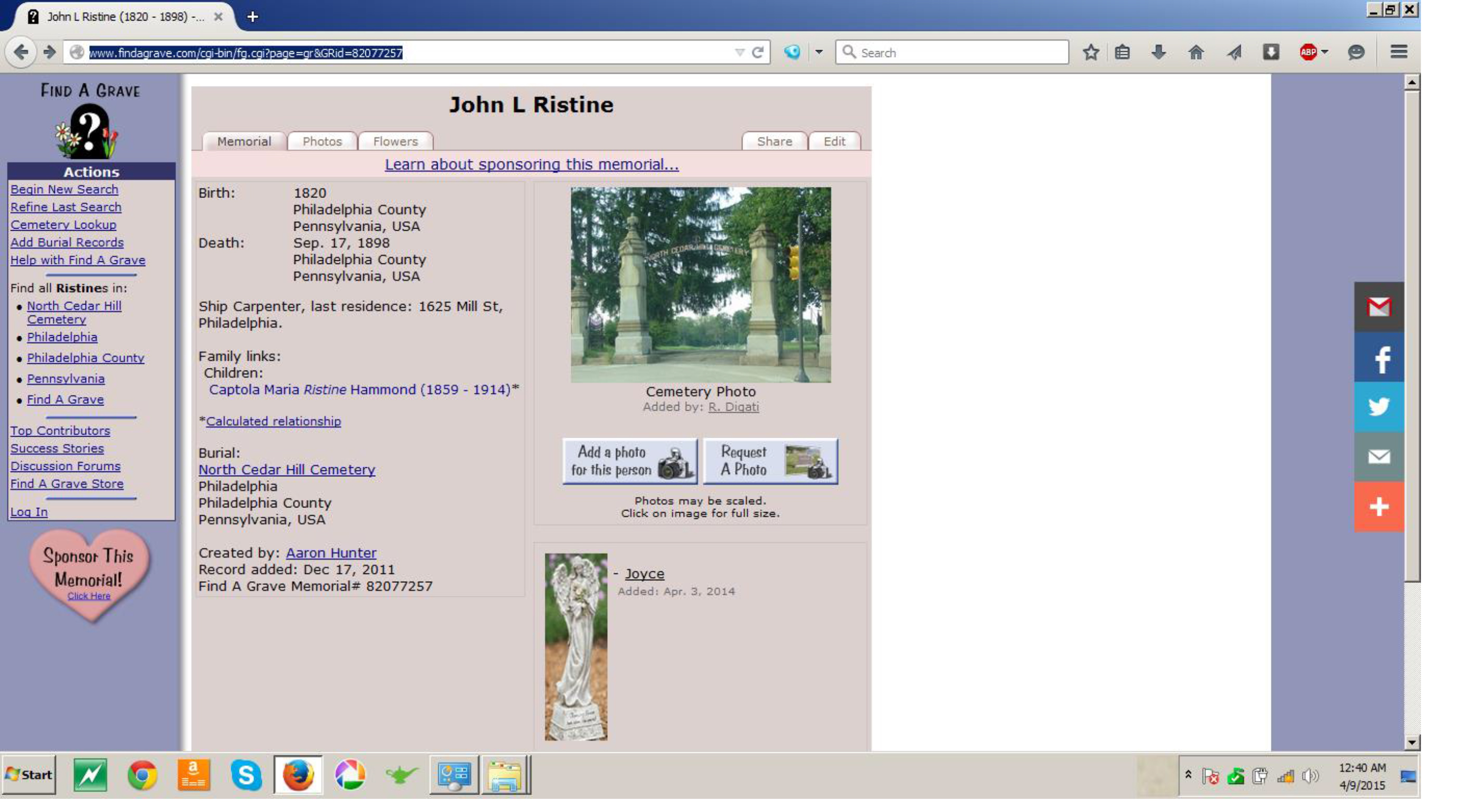 It seems to offer readers of the story of John L. Ristine a chance at an ironic happy ending. Ubi sunt Wenonah and New Jersey and Corn Exchange? Yet here beneath the ground of Philadelphia lies an actuality: that which remains of a name. It remains because it once was attached not just to a boat but to a man. There lie the remains now, anchored by the mass of a stone.

Yet off to the side is a pink heart loaded with words that plead, with an urgent exclamation mark, “Sponsor This Memorial!” The cry seems to insist that the work of inscription is incomplete. The transaction of carrying hay was successfully executed once, and then successfully forgotten. It was recorded in a ledger which there’s no longer a need to read. History has given it its nunc dimittis. But the gravestone still lies unsponsored on the earth. How can we conclude the transaction of reading it when we haven’t been taught how to read?

Ledgerless, wordless, whatever image that might survive of ship carpenter John L. Ristine still waits for a way to speak to us through the picture word “See.” Between a proscenium and a tomb wanders an unremembered name. It was once slapped in paint onto the transom of a barge, but nobody except Timothy H. O’Sullivan learned in time how to read it.