Toward the end of its era, Fascism embarked on a campaign of cultural self-pity. Italy has been attacked by darkness, Fascism told Italy. Everything that Italy has inherited from its past is being violated. In the chiaroscuro, it may seem that nothing remains for us but to grieve. Our candles are out; our heads are bare and bowed before the advent of the black helmets. However, our light will return. Something that will not die bows down to us in our grief and whispers light’s vindicating truth. 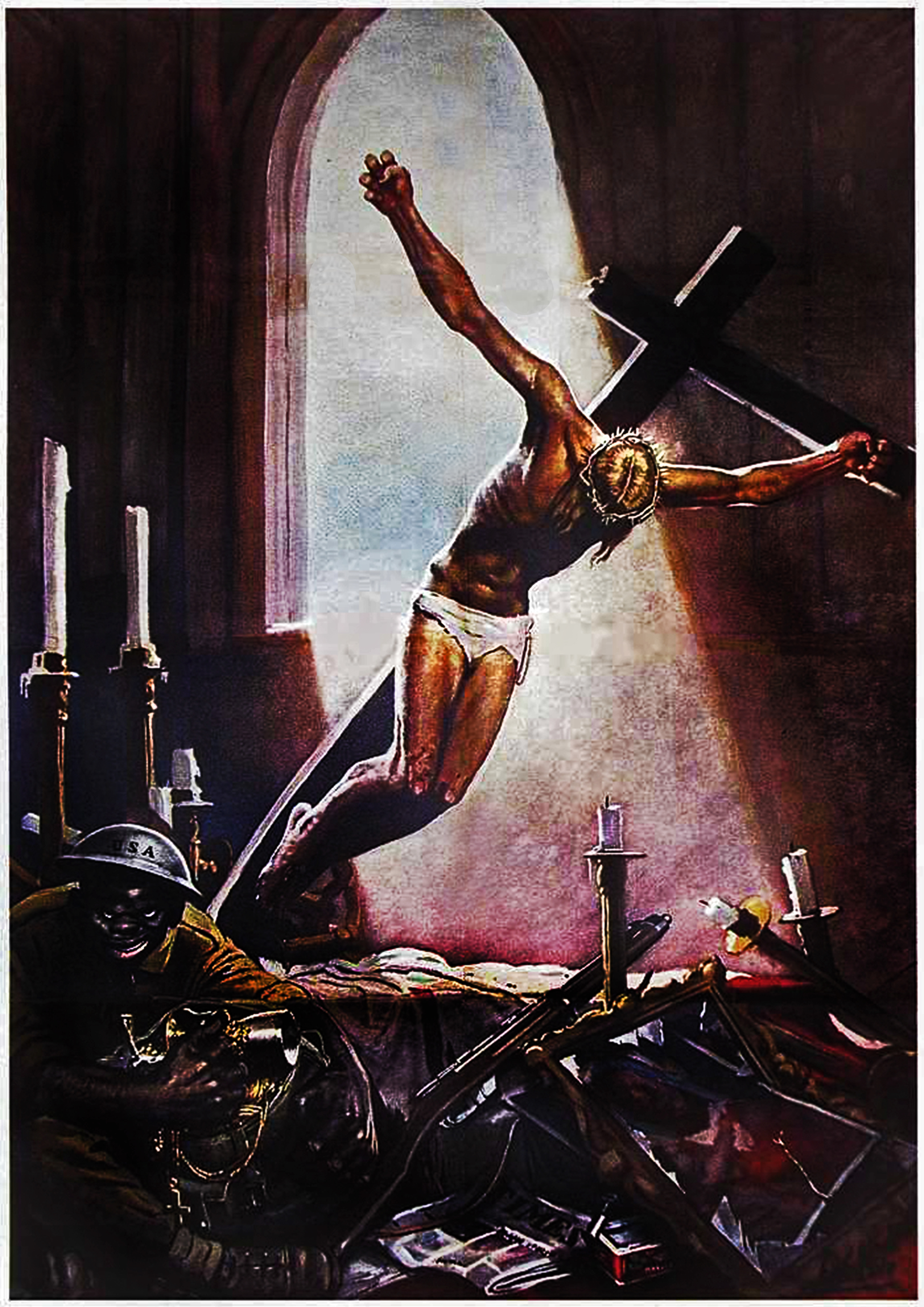 But even as the black helmets were making their slow way from temple to darkened temple, the land under Italy’s temples was being cleared day by bright day from the air. Most of the bombers that came flying through the light to accomplish that task of war were Consolidated B-24s, and these bore a propaganda name of their own: Liberators.

In the sheets of light beneath liberation’s radiant onslaught, Fascist art could do nothing except to repeat its now meaningless trope of darkness. Desperate to continue depicting the trope, it once went textual and tried to supplement its now meaningless self with an explanation outside the picture:

Outside the picture, the pun is too witless even to be visualizable. But the image’s trope of darkness retains some meaning nevertheless. Seventy years after the fall of Fascism in Italy, it still speaks to the politics of the United States. It does so because it articulates a myth, and myths are hard to make die. 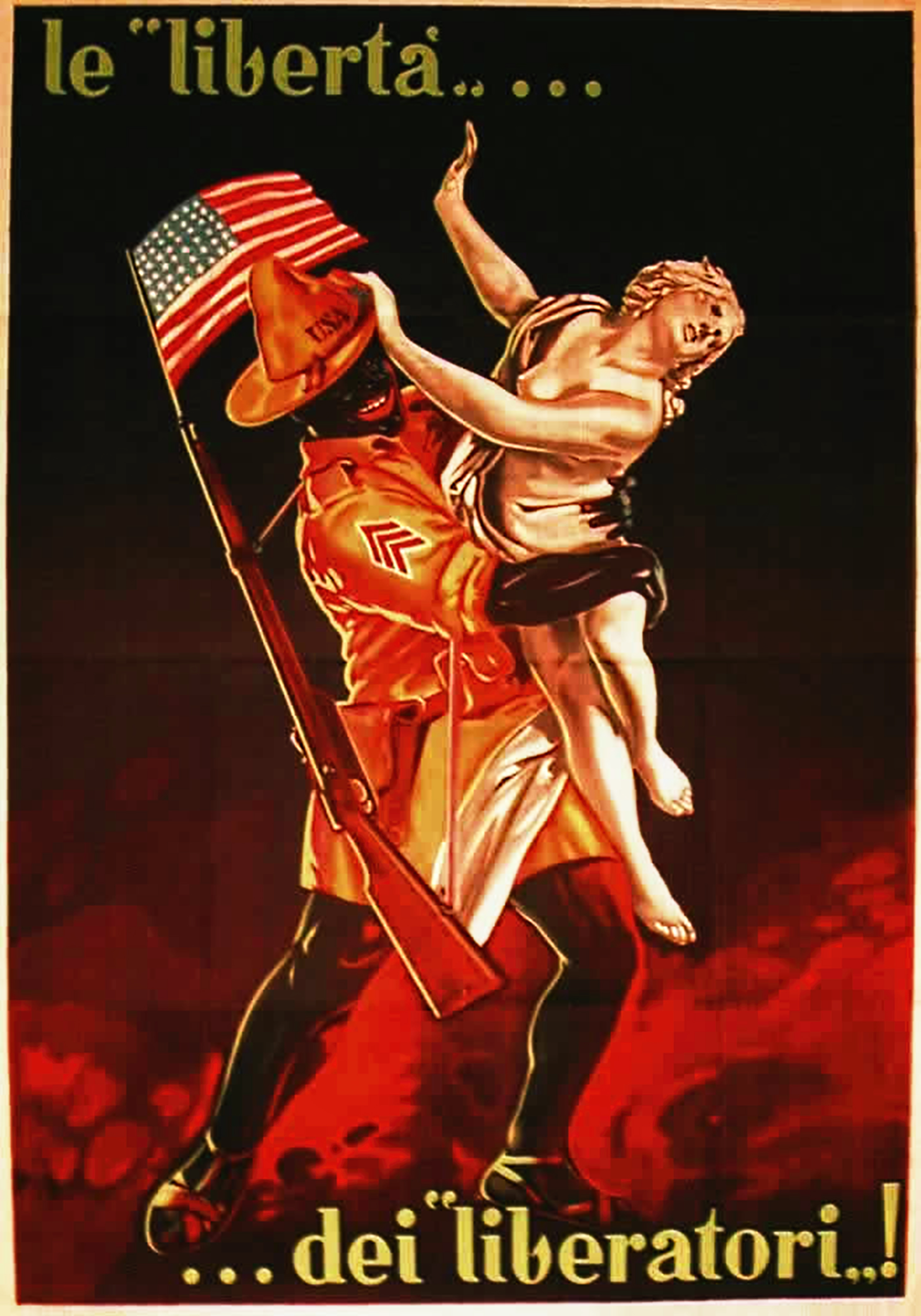 After all, there can be no light without darkness. That is one sense of the myth of Pluto and Persephone. 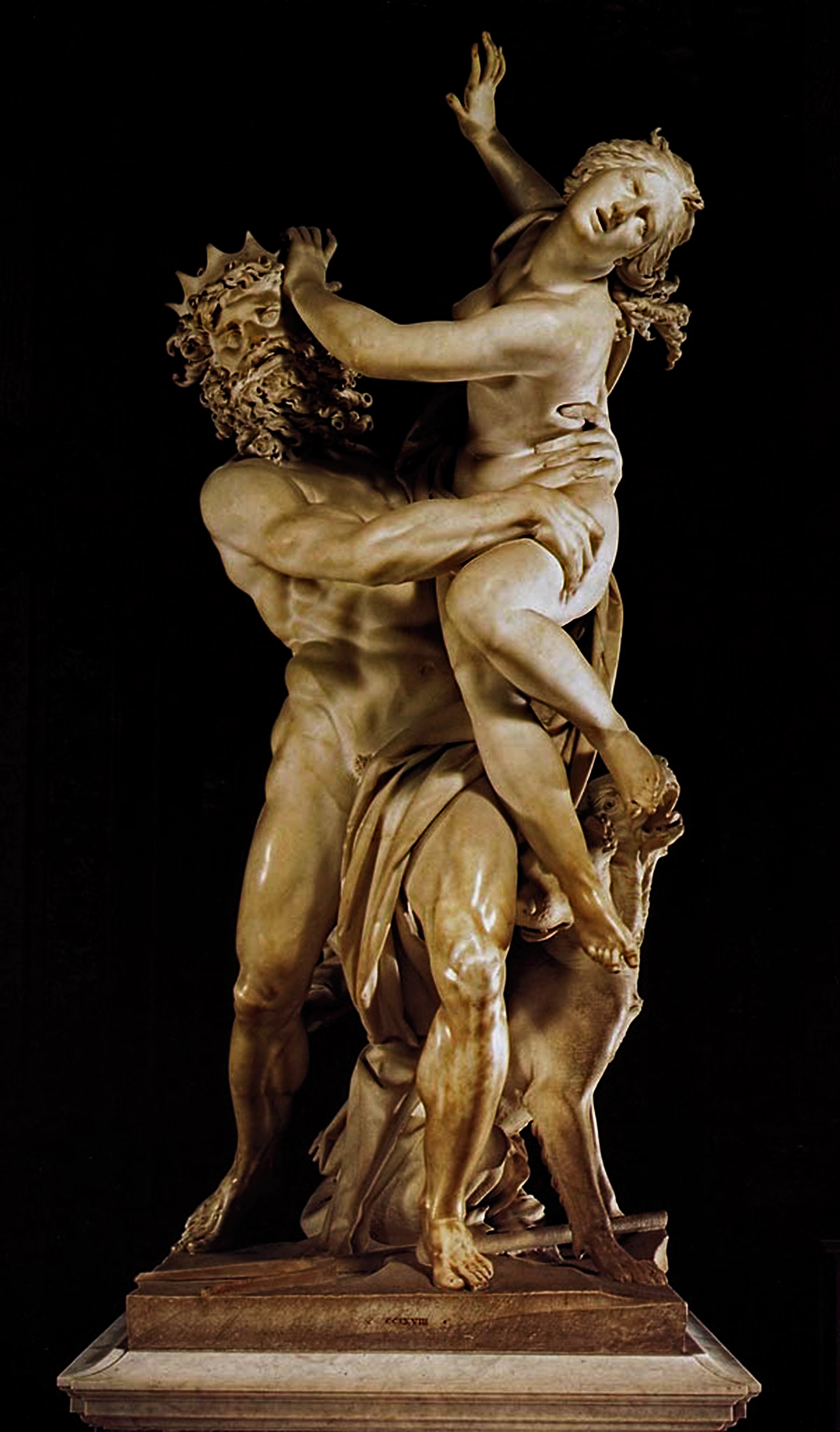 That myth says: Light goes down into the underworld and is reborn there from death to life. This will be the happy ending of the art-stories of the looted church and the rape which has been redeemed for art by a successfully understood allusion to Italy’s cultural heritage. When he wrote the history of anecdotes such as those, Ezra Pound was fond of using the word splendor, which means brilliance or radiance. But a splendor returned from the underworld has been in that which is dark, and when it reascends it can never again be immaculate. Bearing shadows within the folds of its mantle, splendor must bring darkness back with it. At nightfall, splendor’s darkness will rejoin the primal dark. Then, after morning comes, we may pick up our brushes once again, seventy years later, and charge them once again with black.

At the present linguistic moment, the Pound-word “heritage” is one shade of that black. Spoken today by reenactors remaking themselves as ghosts on battlefields, it is a word that darkness has taken to itself and refashioned as a mode of immortal yet unliving form. Look at heritage’s eyes. Look at its pointed fingers delicately touching its slender musket. Understand, as you look, the lesson that heritage is wordlessly teaching you: the lesson that darkness, having once been comprehended by art and shaped by it into myth, can never wholly return, forgotten, to the past and to death.

Sources: the Italian propaganda posters come from a collection at http://ic.pics.livejournal.com. The image of the B-24 comes from a site for airplane modelers, Wings Palette, at http://wp.scn.ru. Its Russian caption translates as, “98th Battle Group, Libya, 1943. Shot down August 1, 1943, by [Bulgarian] Lieutenant Stoyan Stoyanov.”

The image “Unidentified soldier in Confederate uniform with bayoneted musket and knife” is in the Liljenquist Family Collection of Civil War Photographs, Library of Congress, http://www.loc.gov/pictures/item/2014646219/.