On the wall of the gallery where the exhibition of “degenerate art” was held, the placard was an earnest of art’s pedagogical instinct. Even in the dark, something in an image seems to want to expose itself before eyes watching in a light-filled space. But the lesson this placard taught was the lesson of darkness. Holding forth in a gallery filled with images on schedule for erasure, the placard’s first paragraph made a case for ceasing to look. Its prose taught this lesson ironically, as if understanding that because irony straddles the blur between the actual and its representation, it can teach us that we actually don’t need reality. After the picture has been removed from view, we can reproduce its desired effect with no technique more complicated than some ironic quotation marks and an exclamation point.

This is the way they “saw” the world, the “masters” of decadent art which was  praised to the skies by Jews and hysterical babblers!

After that first application of the technique, too, we can elaborate it with (for instance) the rhetorical flourishes of multiple exclamation points and the wide-spaced Fraktur equivalent of italics:

These were the “masterworks” that were paid for with the hard-working German people’s tax money!!!

On the wall of this particular art gallery, an artwork made of rhetoric functioned to re-engineer art from an apparatus for the construction and elaboration of sight to an apparatus for erasing sight. As a component of the mechanized psychic culture of the Third Reich,  this teaching machine taught Germany that vision was nothing but a taxable rhetoric, one to be experienced rhetorically by means of statute and editorial. On a wall covered with images, the function of the rhetoric was to exclude the images from perception. Having been de-perceived, the images were no longer to be accessible by desire. Imagination, the idea of the possible growing out of the actual, was to have been replaced by maxim, in black ink on a white ground. And nothing about maxim limits it to a particular history or a particular language. In the darkness just before dreams come, it may be that we’re all capable of yearning for maxim’s pure innocent clarity of black and white. But the black and the white themselves seem to embody a spectral yearning for color.

Consider, for example, this ambrotype: a mid-nineteenth-century work of photographic art which was born in the conviction that it suffered from a color deficiency. During the 1850s, the best photographs were made by the daguerreotype process. Daguerreotypes were expensive, however, and the ambrotype was marketed as a low-cost alternative. Experienced with its case closed as the return on a small investment in luxury, a daguerreotype and an ambrotype will be equally satisfactory. Each will come to us as an image nestled behind protective glass in a pyx of velvet and gold. But once the two images are looked at, they will migrate to separate realms of evocation, one much smaller and less scenic than the other. Unlike a daguerreotype, an ambrotype displays only a limited range of tones: from dark gray to light gray, without real whites. Unlatching its case and peering through the glass, we sense that something is missing from the light in there. Portrait photography exists to evoke the memory of a face, but in an ambrotype a part of the face’s spectrum has failed to register its presence. So this ambrotype is a record of an effort to restore the spectrum of memory. 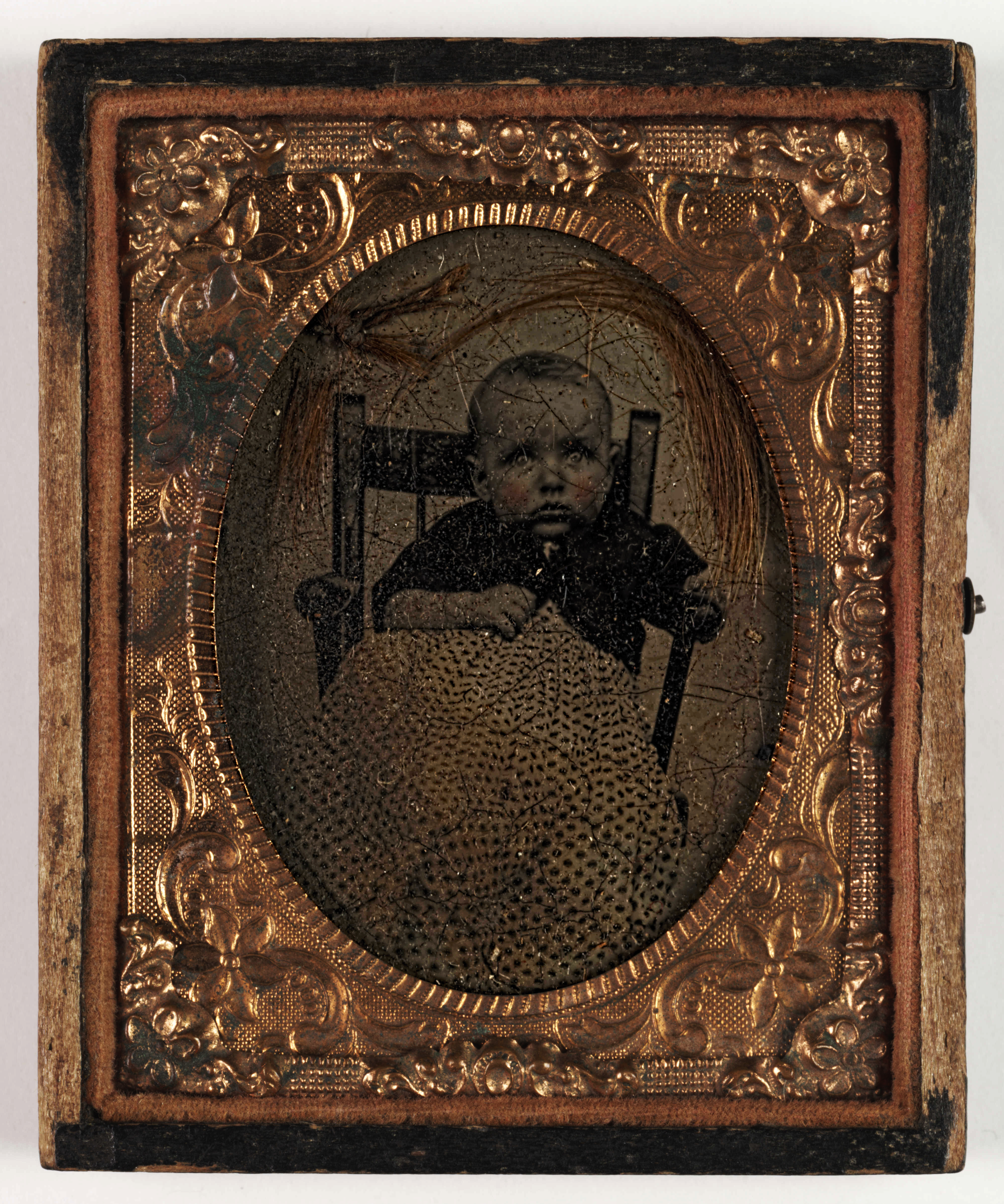 Propped in a little chair, a baby boy once stared for an instant in the direction of a camera. Mechanical auxiliary of memory and gaze, the camera forever returns the stare. From an imaginable perch on (say) your shoulder, it collaborates in your work of seeing. On the day in the 1850s when that labor began, it brought forth a lightly exposed negative and mounted it on black velvet. Above its light-absorbing background, the negative’s areas of photoreduced elemental silver began sending light back to vision as an unending flow of reflection: the optical illusion of whiteness, produced in eye after eye down the generations. The ambrotype’s chemistry had gone to completion. More development ensued, however. A soft little brush touched the baby image’s cheeks with a conventional representation of the adjective “rosy.” And then, just before the little casket’s glass lid was brought down, a lock of the baby’s hair was dropped onto the image from an area of memory just outside the photograph’s time zone. Seen now through the glass, the negative lies still on its velvet mattress, its gray face brightened into memory by a layer of cosmetics and garlanded with a wreath of hair which was still warm from the touch of a hand at the instant the glass came down for the first and last time and the wooden outer cover closed.

So sehen wir die Welt. With the passage of time, the tense changed from past to present and the ironic quotation marks on the wall of the gallery fell away. We can reopen the ambrotype’s casket after all. For us as we look, and for the generations that will look after we have gone, the outlook is happy because light and photochemistry and image’s uncontrollable need to teach don’t come to an end.

National Media Museum, “Ambrotype of a baby with cuttings of hair under the glass,” photographer unknown. http://www.flickr.com/photos/nationalmediamuseum/3588772191/. Post-processed for contrast and color balance.