The image is faded and the communication it records is in a body language which has become slightly foreign. This is a picture of time past. Written at the bottom of the negative, a date faintly prints out in reverse: 11/30/15, I think. In the print, someone’s hand holds the horse still as he poses under the autumn light of 1915. Wearing boots with a labor-intensive shine, someone else stands at attention at the horse’s head, holding a message between gloved thumb and gloved fingers. A third someone has previously groomed the horse’s mane into Afro-braids, and within the chemical milieu of this historical composition the process of decay is now transforming the image of Kaiser Wilhelm II’s cape into a snowy Alp. Its massiveness owes itself to the servility busily bustling about its still, steadily cooling flanks.

I open Photoshop and take the white mass in hand. A few mouse clicks later, the passage toward decay has been arrested and the fabric of the Kaiser’s cape has reverted from velvet snow to something rough and gray. Dragged back from the palette of the ethereal and made available to the imagined touch of real fingers, it seems as tangible again as it was on the fall day when it covered a king’s living body. Photoshop seems to have induced us to think we’ve been brought within hearing range of the snap that the Kaiser’s camera made when it generated a fraction of a second’s worth of his recorded history. But of course we don’t carry that thought through to a conclusion in belief, because we know it’s only an aesthetic delusion. It originates categorically with us, and we are categorically excluded from frame 11/30/15. The only thing my labor has accomplished is to have trivialized a work of art. When it was 98 years old, the gray-shaded image of the Kaiser communing with his horse was passing through history toward myth. In my scrubbed and tidied and demythologized version, the image has reverted to the silly thing it was when the shutter closed on it 98 years ago. In restored black and white, with its patina scoured away, it is now only a  current event with a date attached. “11/30/15,” says the date, and all that’s left on the page of its significance is the photocaption, “I record an episode of bad taste.” . 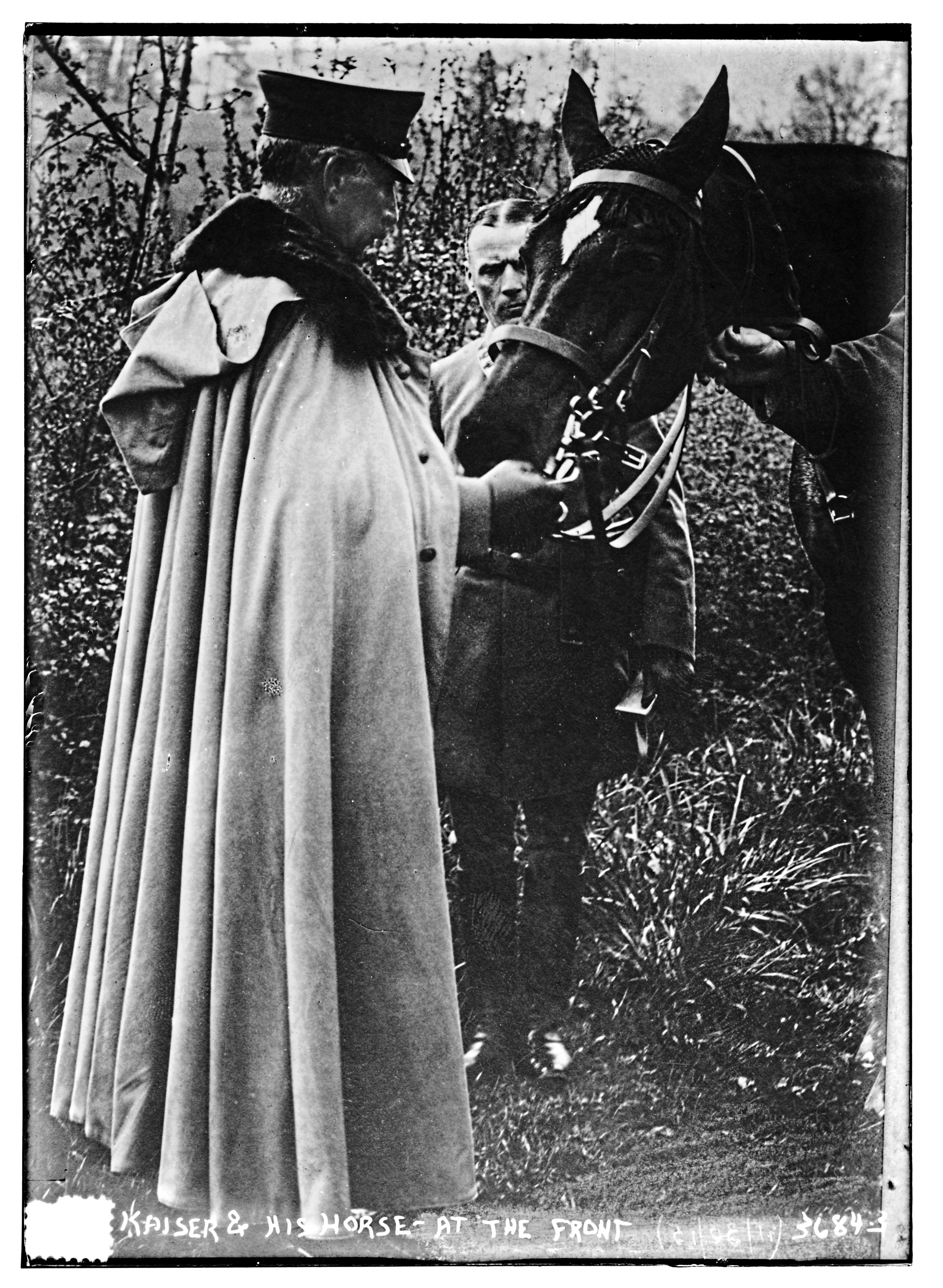 Of course there’s nothing original about a feeling of anticlimax in the presence of what remains from history’s transit past the human. Ninety-eight years before a camera went snap at this king, Percy Bysshe Shelley contemplated  a similar idol and wrote a moralizing political sonnet about it whose A rhymes are the words land, sand, and command. Genre convention leads us to expect a fourth rhyme, and Shelley does supply it. It’s hidden under camouflage, however, near the beginning of line 8, and you can’t see it here.

But you can see it here, and in a poetry-free original. Look. In its image, the idol’s power source is off center and out of focus. Yet as it extends itself in a fist toward its horse, it draws toward it all the concentrating strength of a frowning servitor’s love. We can see why he loves: the fist itself is nothing, but its smooth gloved tumidity is an organ that secretes power into history. Close the hand, then, and make the gesture. This king made the gesture before a camera, and it responded by harmonizing silver halide crystals into a matrix of volume and form, light and shadow. From the camera there then shone forth the death-bringing power of image: that which has been made a part of the desert sand forever, now that the idol’s heart has ceased to move.