A small edit to the fashion dictum: clothes make the man of letters. At this late date you might not be able to identify Arthur Conan Doyle by his face, but a Sherlock Holmes costume is all it takes to return him to the time when his visage seemed unchangeably memorable. In Dover Publications’ Literature and Humanities catalog for October 2012, the Arthur Conan Doyle paper doll is an alpha body, dominating a whole page of other literature. Click his domain to enlarge it. 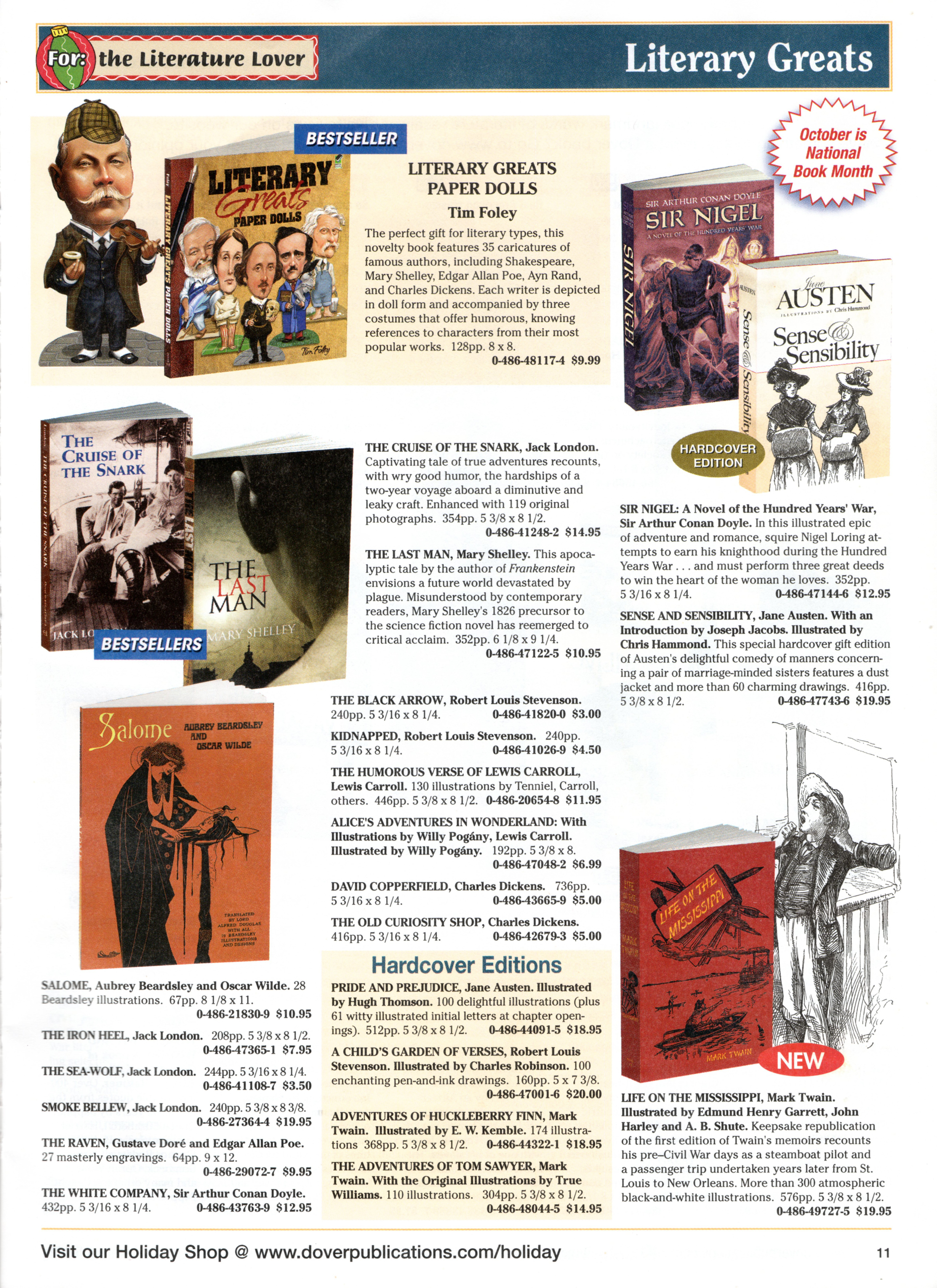 Like Sir Arthur with Holmes’s deerstalker cap, meerschaum pipe, and violin, the four other men in the advertisement for Literary Greats Paper Dolls are accessorized from the workshops of their own imaginations. Hemingway is carrying the old man’s big fish, Shakespeare is holding Yorick’s skull, Poe has shouldered his pallid bust and noir bird, and Mark Twain is toting Tom Sawyer’s bucket of whitewash. But the boys have been joined on their page by a woman, Virginia Woolf, and Mrs. Woolf seems to have arrived there from quite a different boutique. At first glance I thought she was wearing Orlando’s doublet and hose, but no.

Virginia Woolf – on the cover of this book, only she – did not dress herself. That creative task was delegated to someone working in another profession entirely. The clothes of the other writers bear labels cut from the spines of their own books – The Old Man and the Sea, “The Raven” – but Mrs. Woolf’s wardrobe master did his shopping among the discount racks of Dover Thrift Editions. There the customer information read, “Prose that is all nerve endings, nervous breakdowns, suicide,” with the cover term about language marked out. This remaindered Virginia Woolf was then dressed for publication by Sir William Bradshaw, the Harley Street psychiatrist of Mrs. Dalloway, and for her new cover shot he chose a straitjacket.

But what else could he have chosen? When I try to visualize Mrs. Dalloway myself, I see only the face of a movie star: Vanessa Redgrave in Mrs. Dalloway or Meryl Streep in The Hours. On the pages of the book, the words that might have described Clarissa Dalloway herself are sunk in inward reference. It is only from her sense of holding a needle and a thimble that we learn the color of her dress: green (35-36). When she crosses the room to console weeping Peter Walsh (46), she rustles and tinkles. But dresses also rustle and chains also tinkle in To the Lighthouse (152). It was Mrs. Dalloway’s clothes that made their comforting social sounds, not Mrs. Dalloway. And the hazy fabric has also blurred the outline of Mrs. Dalloway’s form.

But outside Mrs. Dalloway’s soul, where the haze (in her essay “Modern Fiction,” Woolf calls it a luminous halo) has not descended, vision and voice and outline remain sharp and clear. There in the zone of clarity, the book’s two villains, menacing Sir William and dreary Doris Kilman, strut forth under brilliant runway lighting, wearing a whole designer thesaurus of social markers. Doris and Sir William have upsprung into Mrs. Dalloway from the lower classes, both of them, and there is no luminous halo blurring Woolf’s vision when it is de haut en bas.

But Mrs. Dalloway once looked upward rather than down, and there she perceived a source of significance wholly different from her creator’s breeding.. From it there flowed a word in a silent language. Neither Mrs. Dalloway nor anyone else in that chapter of her book could read the word, but it communicated happiness to all, as if all could understand it. Mrs. Dalloway’s sensorium is hard to distinguish from Woolf’s as it responds, rising, to the skywritten word, but somewhere in the interior of one soul or the other there is a word for that wordless understanding: “ecstasy.” Literally, etymologically, the word means “standing outside oneself.”

It was strange; it was still. Not a sound was to be heard above the traffic. Unguided it seemed; sped of its own free will. And now, curving up and up, straight up, like something mounting in ecstasy, in pure delight, out from behind poured white smoke looping, writing a T, an O, an F. (28)

Up there, outside herself, what would Virginia Woolf have worn? If she had been a male author, of course, the fashion statement would have been easy to make. As Le Corbusier says, “One can pass judgment on a truly elegant man more conclusively than on a truly elegant woman, because male dress is standardized” (189, caption). So the creator of Sherlock Holmes stands out in his illustration by repeating Holmes’s gesture of wearing a country hat in the city; so the creator of Hamlet stands out by wearing Hamlet’s solemn black. “I have sought external significance by daring to approach the boundary of what is standard,” says such an act. And then it says, “See me there, and judge.” Because women clothe themselves less in order to speak that way to others than to tell themselves what they are, the act was less available to Mrs. Dalloway.

Fortunately for us and for Dover Publications, however, Mrs. Dalloway’s airplane offers to the imagination a function that Woolf’s friend T. S. Eliot called the objective correlative.   Ascend, says the airborne rhythm of Woolf’s prose. Reading then, ascending as we read, we become passengers of Mrs. Dalloway as she rises on the scents of the florist’s shop: “light, very tall, upright” (12). Then, transported above ourselves, we touch down on a wing. On the wing waits our hostess, and she has dressed herself, by herself, for herself, at last. Close Sir Arthur’s and Sir William’s catalog, open Mrs. Woolf’s book, and see. She is in her gorgeous green paperwear. 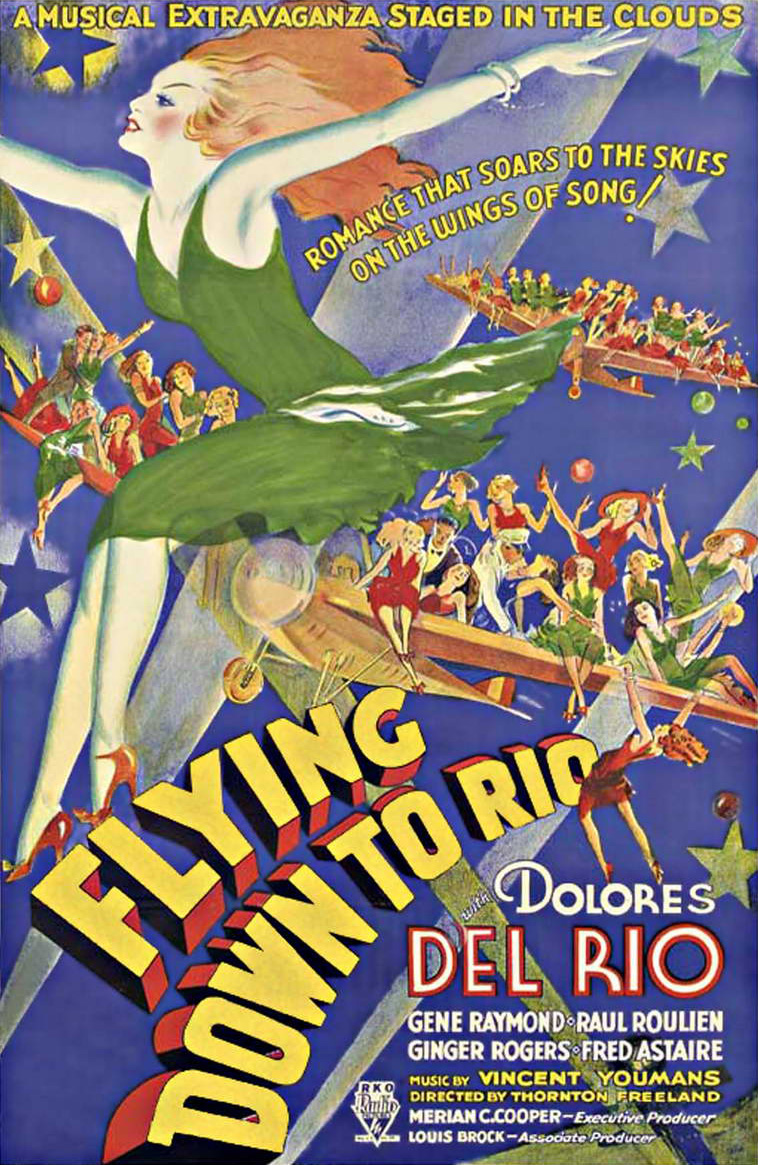