I confess that I expected to see my sister denounce him, and that I was disappointed by the different result. She manifested the greatest anxiety to be on good terms with him, was evidently pleased by his being at length produced, and motioned that she would have him given something to drink. She watched his countenance as if she were particularly wishful to be assured that he took kindly to his reception, she showed every possible desire to conciliate him, and there was an air of humble propitiation in all she did, such as I have seen pervade the bearing of a child towards a hard master.

Great Expectations, volume 1, chapter 17: bad-tempered Mrs. Joe, beaten almost to death with Magwitch’s iron manacles, has lost her power of speech but mysteriously become affectionate toward the surly Orlick. Toward the end of the book we’ll learn that it was Orlick who attacked her.

Or, at any rate, readers in 1861 would have learned. Since that year when Dickens published the solution to the mystery, mysteries and their solutions have changed. It isn’t likely that any of us know more about the mind than Dickens did, but we certainly can say more. With the help of a Freudian lexicon that readers in 1861 didn’t possess, we’ll find it easier than our ancestors did to break the code of Pip’s encrypted comparison, ” . . . such as I have seen pervade the bearing of a child towards a hard master.”

We won’t expect the same things from the mystery that our ancestors did, either. During its prehistory, Great Expectations loomed over its readers as an original work of language, standing alone. For us it has been overlaid by other texts and become a classic — that is, a text enwrapped like a lictor’s axe with a beltwork of Cliffs Notes and Wikipedia and downloadable undergraduate papers. Socialized to read a classic as if it were inseparable from that infrastructure, we’ll conceive it as only good manners to have experienced the secondary sources simultaneously with the primary source, immer schon, and learned all the endings in advance. In their time, the first readers of Great Expectations read Great Expectations. It was a part of the language of that time. In our time, we read the language of our time — both the part of the language that includes Great Expectations and the part that simultaneously includes a Harold Bloom anthology of Dickens criticism and today’s newspaper.

On September 3, 2011, for instance, we may set down our copy of Great Expectations next to the newspaper and think something like, “Mrs. Joe’s relationship with Orlick reminds me of President Obama’s relationship with the Republicans.” The thought will enter our minds as unbidden as this morning’s junk mail entered our mailboxes.

And what will happen to our reading of Great Expectations if this morning’s junk mail actually comes from the Republicans?

For me, this Saturday morning’s junk mail did. Waiting for me in the mailbox was a questionnaire (or “questionnaire”) crafted by the Republican Senate Leadership Survey for the purpose not of eliciting information but of stimulating an emotional response by means of loaded words and leading questions. 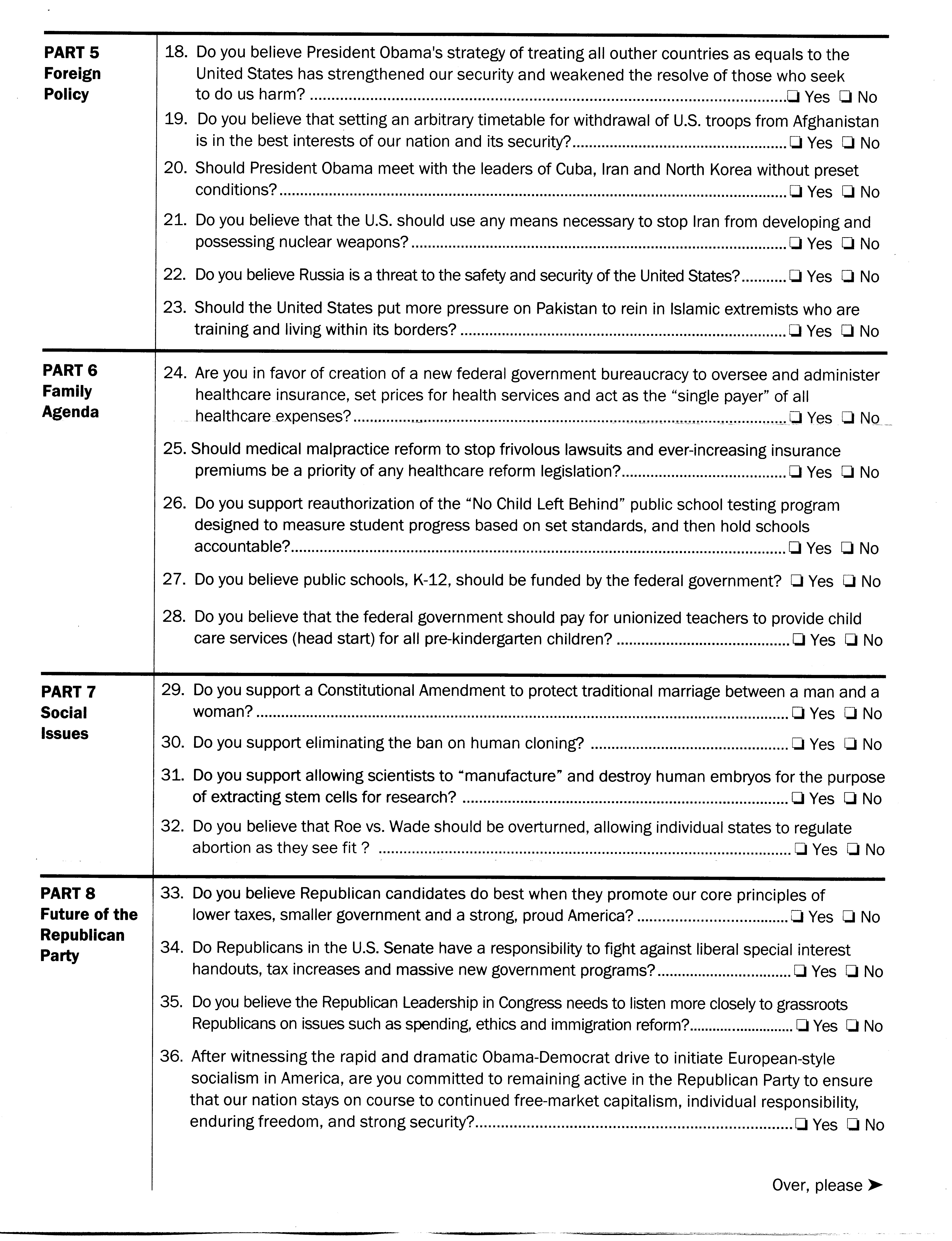 The three-page “questionnaire” was followed, of course, by an invariant fourth page requesting money. That was the payload of the emotional response. But the mailing also included a four-page cover letter which didn’t request but demanded. “Your immediate attention is required,” its first page began, and it concluded (just before the modestly self-effacing “Over, please”):

DO NOT DESTROY YOUR SURVEY! The enclosed Republican Senate Leadership Survey is an OFFICIAL REPUBLICAN PARTY DOCUMENT. Your Survey is REGISTERED IN YOUR NAME ONLY and MUST BE ACCOUNTED FOR upon completion of this project.

Of course the word “official” can’t have any perlocutionary meaning here, if only because it doesn’t communicate any sense of office. But one word in this paragraph does mean something. From its breech in its sentence, the modal auxiliary “must” falls on the reader like a blow from a piece of iron. 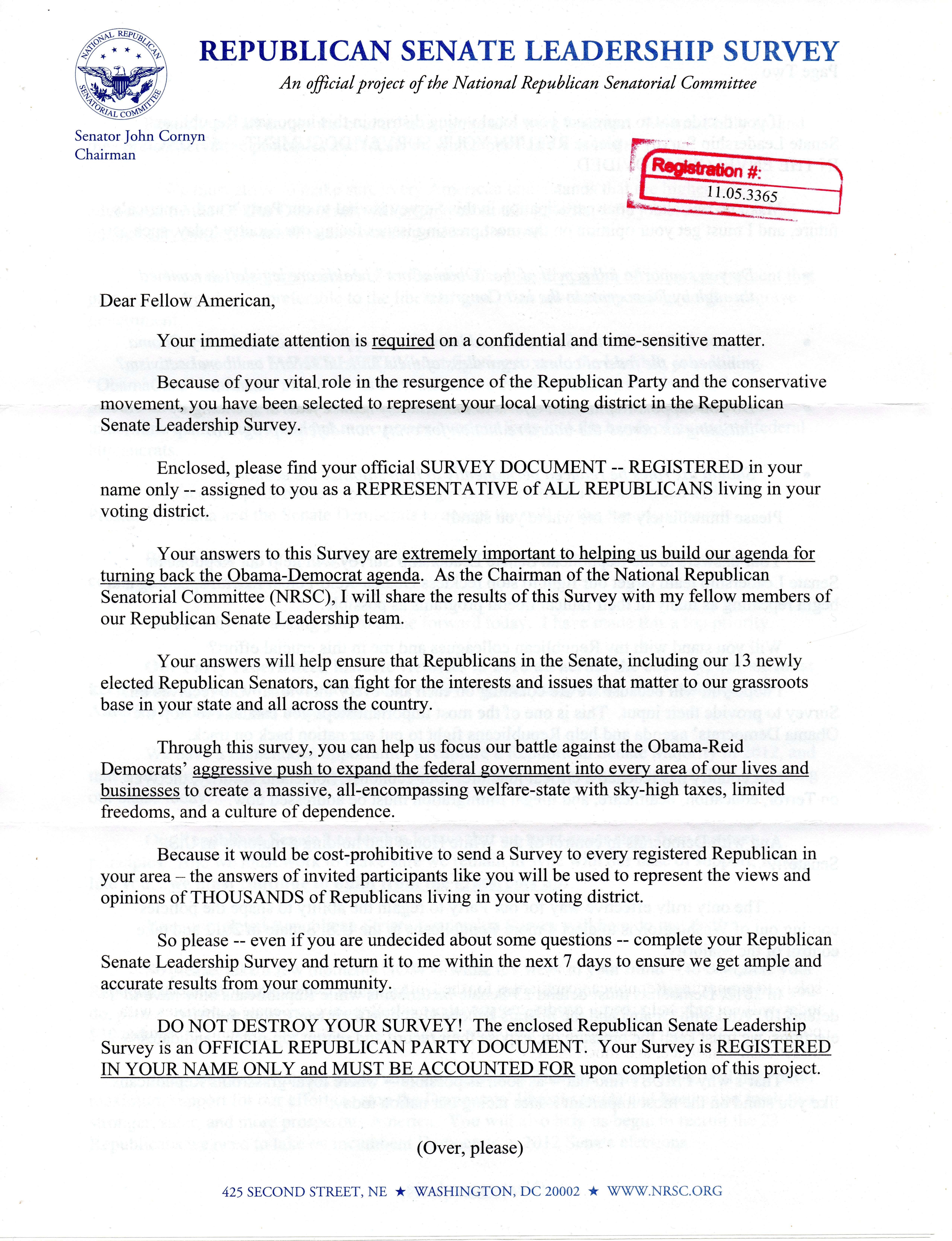 At least it seems to have descended, this year, on President Obama. For myself, I am now going to disobey an order, destroy the “questionnaire,” return Senator Cornyn’s postage-paid reply envelope empty, watch a few YouTube parodies of Bruno Ganz in his Hitler suit shrieking in underlined caps, “Das war ein BEFEHL!”, get back to my classic and my newspaper, and start rethinking my own expectations.