If it’s taken down from its shelf in a library at Harvard and opened, the crumbling old offprint from The New England Journal of Medicine can teach us that the Americans of three-quarters of a century ago inhabited bodies that were only partly like ours. 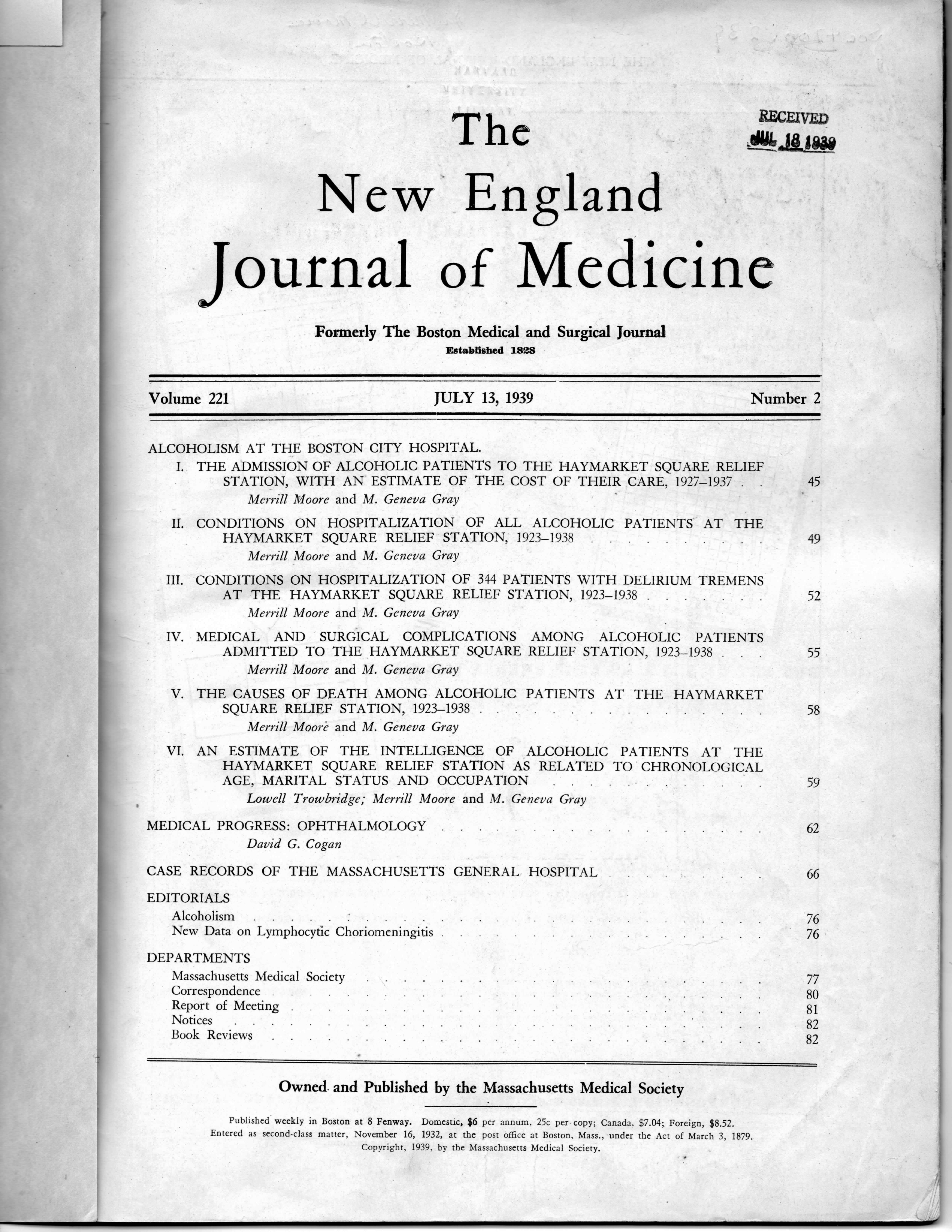 Right at the start, for example, a pharmaceutical manufacturer reminds physicians: “In the absence of epidemic amebiasis attention may be diverted from the established fact that 3 to 10 percent of the general population is infected with Endamoeba histolytica. Outright clinical symptoms are most likely to occur during the summer months” (front matter, p. vi). In the technical language of medicine, those words say that in 1939 amoebic dysentery, a disease that Americans now associate only with third-world poverty, was still endemic in the United States. And of the patient discussed in the case record on p. 71, the text matter-of-factly notes, “Two years before admission she had been treated for scurvy.”

The historical strangeness of bodies from the past doesn’t originate only in their diseases, either. When people thought about other people’s bodies in 1939, every part of every body communicated itself through a language that we’d now have to call “1939.” On p. 49 of the offprint, for example, the authors of a statistical study of alcoholism report: “All but 76 patients were white. There were 62 Negroes, 12 Negresses, and 2 Japanese men.” To read the word “Negresses” now seems almost like experiencing a paleontologist’s instant of Keatsian discovery. Coming into startling view on its page, the extinct word emerges from its matrix in the text like a fossil emerging into sunlight under the blows of a sharp little pick-hammer.1

I’m reading the word now for the sake of the man who wrote it: Merrill Moore (1903-1957). In the 1920s, Moore was the youngest of a group of remarkable poets who gathered around the Vanderbilt University English professor John Crowe Ransom and published their work in a magazine called The Fugitive. The Fugitive group underwent two metamorphoses after that era: first into a group of right-wing anti-capitalists who called themselves the Southern Agrarians, then into the literary theorists called the New Critics. In English departments, the most enduringly famous members of the group are Ransom himself and his students Allen Tate and Robert Penn Warren.

Not Moore, however. As the mentor of the Fugitives, Ransom gathered his students for regular revising sessions, but Moore just wouldn’t revise. For that he had a genuinely amazing excuse: he was quite possibly the most facile poet in the history of the English language, and rather than bring one revised poem to the weekly meetings he’d bring fifty brand new ones. With only a few exceptions, all of his poems were sonnets, and he composed those as fast as he was physically able to write the words down. In fact, he learned shorthand so that he could physically write the words down even faster. That’s why one of his volumes of sonnets (one of many) is called just M — M for Merrill, M for Moore, and M for the Roman numeral. Yes, that one fat book contains a thousand sonnets — that is, 1000 x 14 lines, or a body of verse longer than Paradise Lost and Paradise Regained put together. I flipped through it once, and line after line called to me as I opened the pages into light. There’s no doubt that Moore was a poet. But so far as I was able to see in that one fast scan, he never finished assembling his lines into poems.2 The consequence was predictable. Sixty years ago the anthologist Louis Untermeyer (1885-1977) was still including a few of Moore’s sonnets in his collections, but nobody reads them now.

But Moore’s major at Vanderbilt was pre-medical, and in due time he became a psychiatrist who practiced at hospitals associated with Harvard and wrote the little monograph we’ve been looking at. It’s as a psychiatrist that he’s remembered now to American literary history, because in that capacity he figured in the lives of several other poets. He kept Edwin Arlington Robinson’s depression and alcoholism under control, counseled the Harvard sophomore Robert Lowell to transfer to Kenyon College and study with Allen Tate, advised against releasing Ezra Pound from St. Elizabeths, and failed to prevent Robert Frost’s suicidal son from killing himself but did save Frost’s own life by calling the ambulance when Frost was suffering a toxic reaction to some medicine. During that period, too, some of his sonnets were illustrated by Edward Gorey, who was then an unknown Harvard undergraduate.

— a conventionally posed photograph taken during World War II and a more dramatic photograph, all foreshortening and intent concentration, of Moore drawing a blood sample from a patient in 1939, the year of his monograph on alcoholism. As it happens, Moore was a photographer himself, and he took his pictures with the same energy he expended on healing patients, writing sonnets, learning languages (in the Pacific during the war, he picked up, among others, Mandarin and Maori), and swimming marathons. By his own estimate, he took 50,000 photographs in the course of his short life.

Ever since I learned that statistic, I’ve wondered it what would it be to experience a photograph by Moore. Might the image be as preternatural as its creator? For instance, might the dramatic photograph on the Harvard site be a self-portrait? 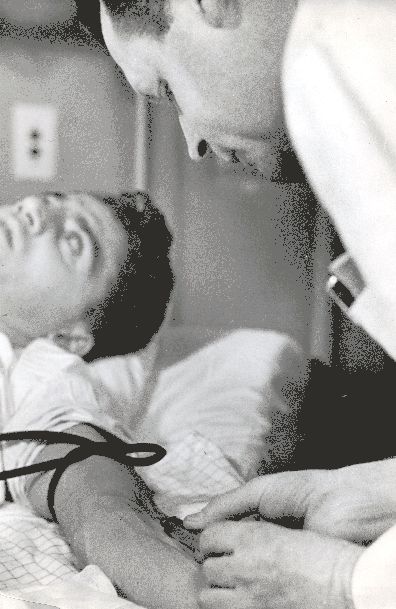 I sent a query to Harvard. Jessica Murphy, reference archivist at the Harvard Medical School’s Center for the History of Medicine, replied: “The only information with the image indicates that it was taken by Pix Publishing, New York, and was transferred to the library in 1939.”

Pix Publishing was an agency that marketed images by some of the twentieth century’s foremost photojournalists to magazines — most prominently, to Life. Life’s complete photo archive is now in Google, but this image isn’t there. However, Pix Publishing’s own archive is now at the Art Gallery of Ontario.

The Resource Centre at the Art Gallery of Ontario lists its hours of operation as 1:00 to 4:45, Wednesdays through Fridays. However (as of July 2011, at any rate), no one ever answers the phone during those hours, and voicemail messages are not returned.

For the practical purposes of ordinary understanding, then, the history of this image is gone. Free-floating now in an ahistorical space, an image that once had a journalistic context in what’s called the real world is now only a composition in black and white. It was once an illustration of Dr. Merrill Moore, but now that literary artifact has been buried on its page under a layer of silver halides.

Words can still cry out from under their coverings, of course. On a shelf at Harvard, bound into the back of Dr. Moore’s monograph in The New England Journal of Medicine, is this. 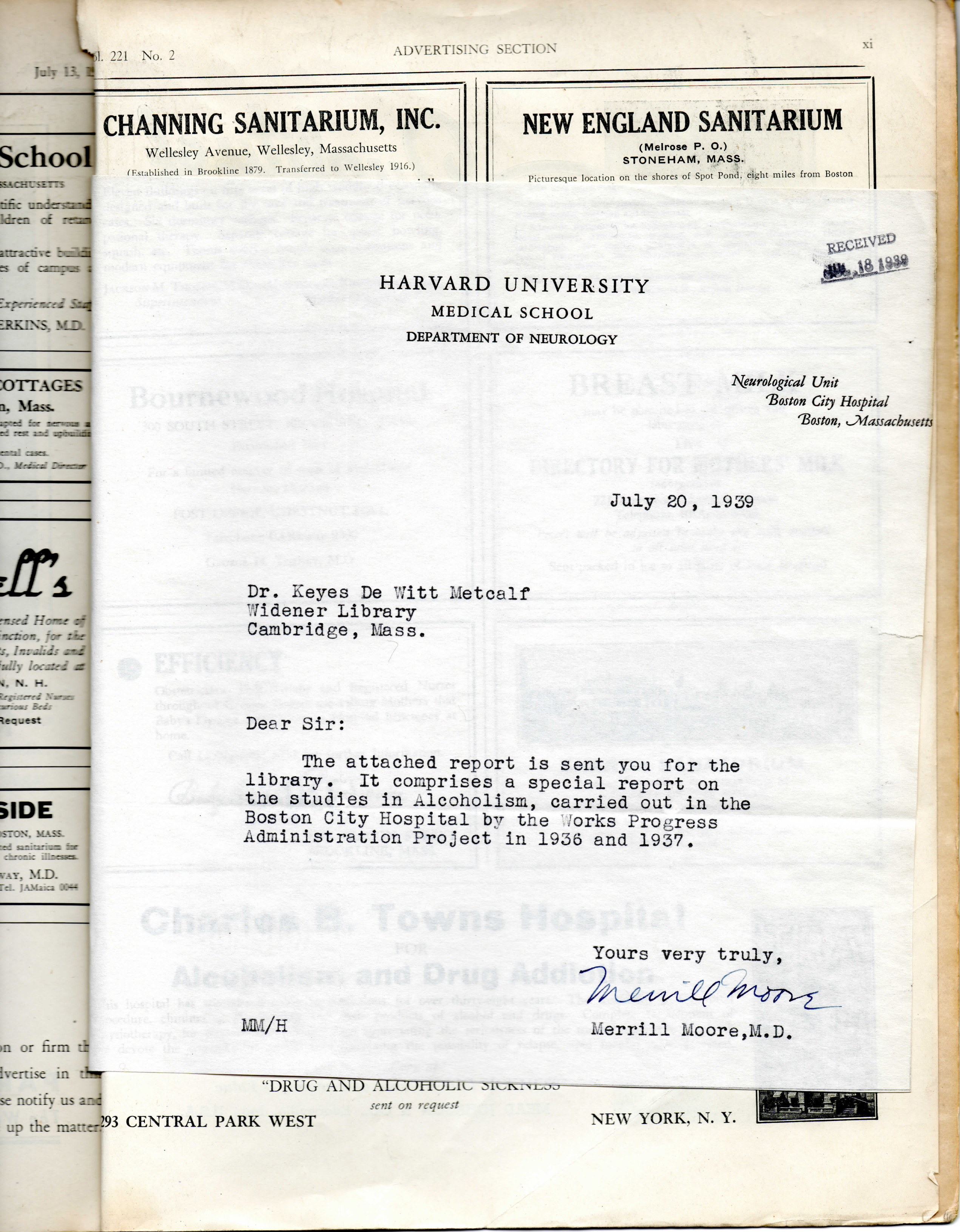 The due-date slip inside the back cover tells me that I’m the first person to have looked at these words since October 6, 1977. The slip itself is brown with age (its first date stamp is November 6, 1939), and its contents date from another era of economics and of prose style: “A fine of five cents a day is incurred by retaining [this book] beyond the specified time.” The bound-in letter too is appareled in the past: written on a manual typewriter and signed with a fountain pen. It is now one with the word “Negress” and the sonnets of Merrill Moore. There on its slip of Harvard stationery, the document has gone strange. Its verbal syntax is still intelligible, but its historical form is now on the way to incomprehensibility.

Of course that history is still extant, and we’re free to keep searching for dictionaries of its language. Moore’s papers — 590 boxes containing 131,750 items — are now in the Library of Congress.  There, the opening pages of their catalog entry read: 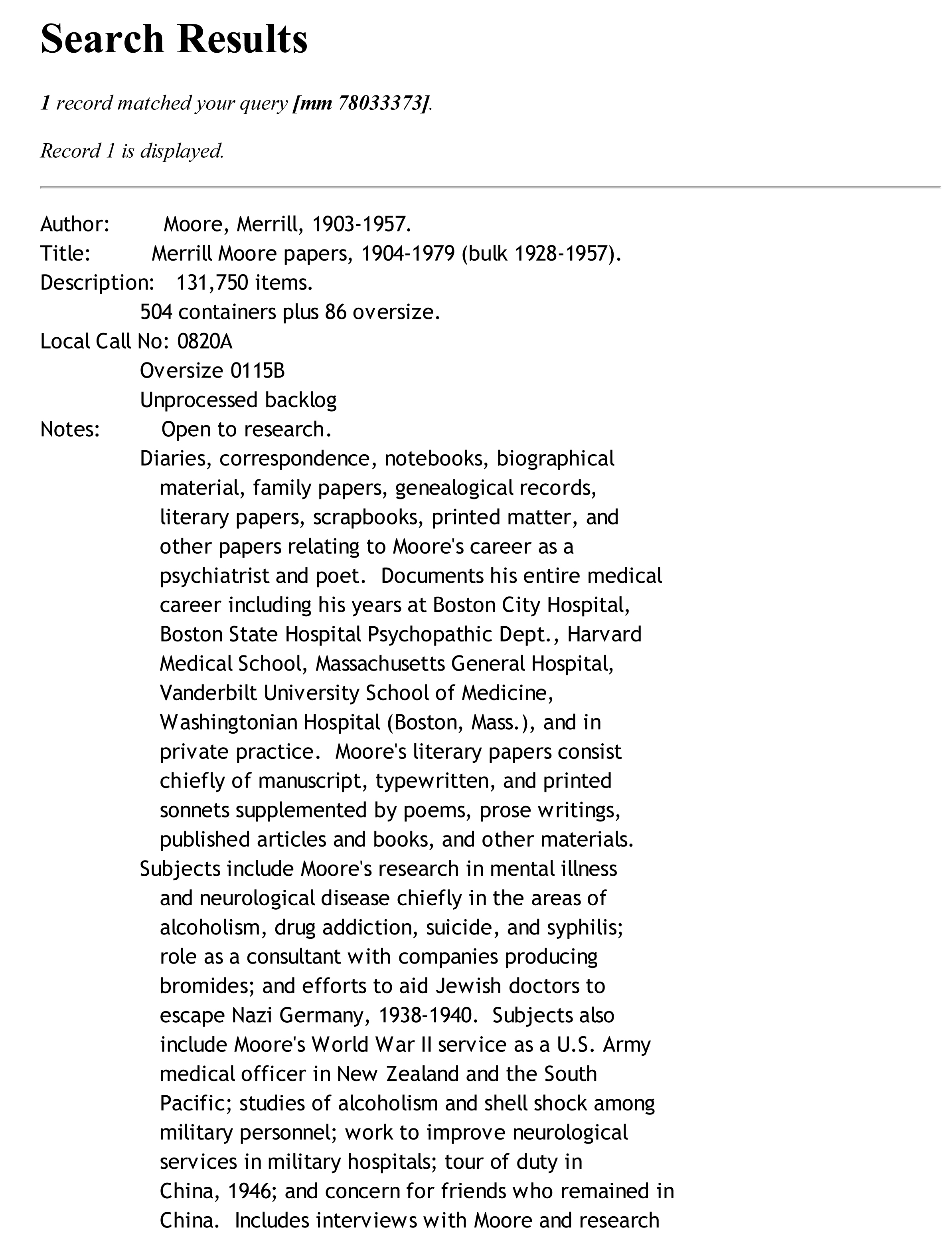 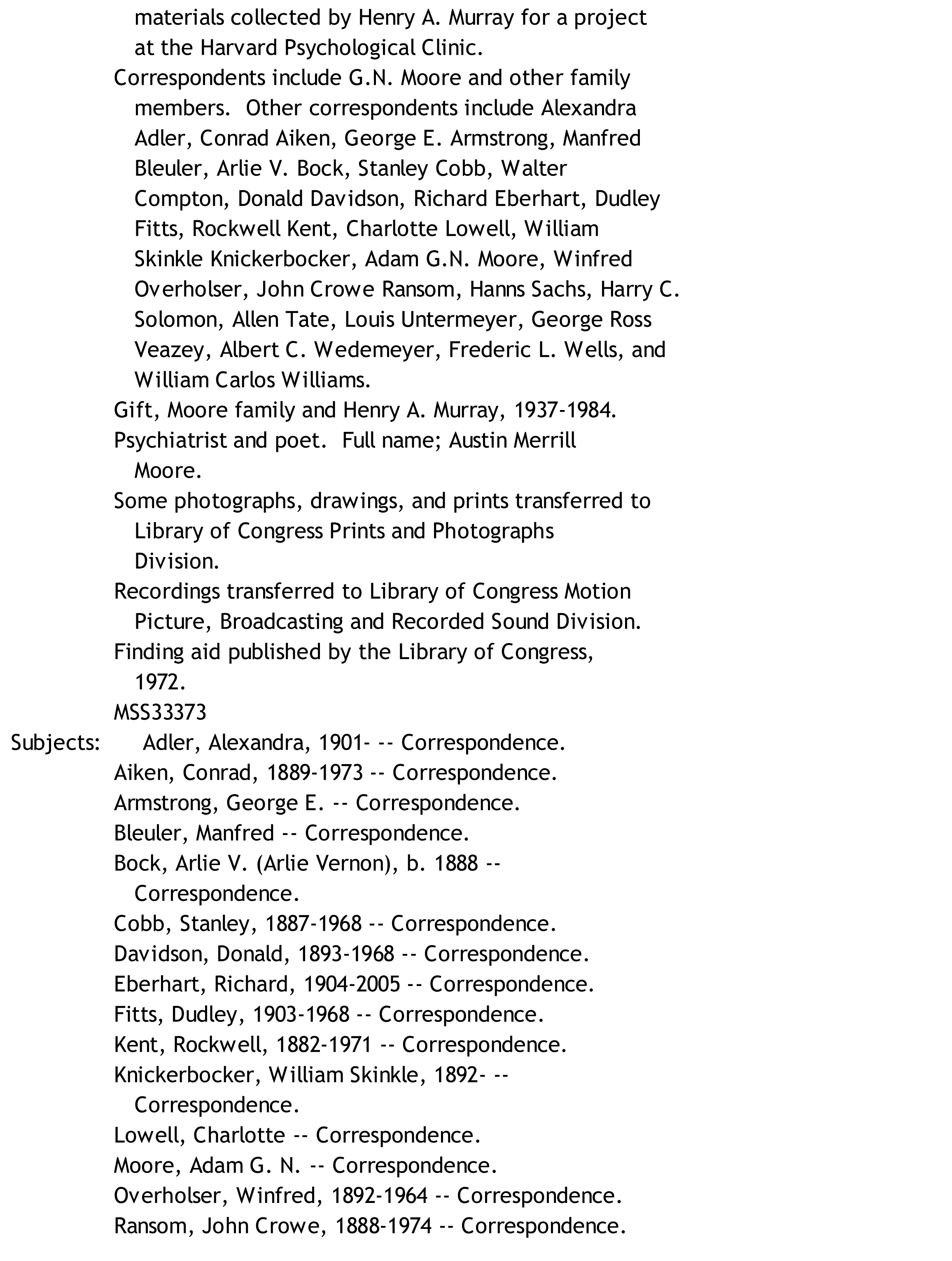 According to a separate catalog entry, the photographs, drawings,and prints include an album containing “136 portraits, World War II and photo of New Guinea female.” The images haven’t been digitized, but I suppose they may be viewed on site at the Library.

But how, now, can anyone see “New Guinea female”? Like a sonnet by the amazing Merrill Moore, which is read now only because it is a sonnet by the amazing Merrill Moore, an image called “New Guinea female” has lost the context it had at the moment it was created. We still own the female’s sequestered image and its companion image of a white man drawing blood from another white man, but even that still comprehensible white glyph has been translated out of our language. For us, now, it can signify only an instant in 1939 — one of the instants when it was possible for an unimaginative reader to understand without effort that Americans were getting scurvy and amoebic dysentery and Merrill Moore was writing sonnets with a fountain pen. That instant would have risen to consciousness through the language called “1939.” But like the word “Negress,” the language called “1939”  — the language written by the poet and photographer Merrill Moore — has now faded to white.

1 Technical addendum: the academic matrix surrounding the fossil word “Negresses” has its own petrified ancientness. In this statistical study, for example, no statistical analysis whatever has been performed beyond simple counting. A textual trait of that primitiveness is undeveloped logic, as in this non sequitur: “There appears to be some relation between occupation and certain age levels. Thus, it appears that older men [in this study of alcoholism] tend to be laborers and seamen, whereas the salesmen and longshoremen comprise the middle-aged group. Possibly this indicates a failure to make occupational adjustments and a gradual decline with increasing age into the less skilled or totally unskilled occupational categories” (61). In this passage, the words “failure” and “decline” refer to change within each age group, but there is no control for any difference (such as a difference in education) between the two groups. As of 2011 The New England Journal of Medicine, the most prestigious medical journal in the United States, couldn’t possibly publish such an elementary error. Physicians have a more quantitative education now than they did in 1939.

2 One possible exception to my complaint about no finished poems by Moore is the sonnet I was able to memorize from beginning to end in a single fast reading. It’s a psychiatrist’s sonnet, and it goes: